The final JKS England Black and Brown belt training session of 2014 took place on Sunday 11th November, just a week after our successful National Championships. The venue was again in the excellent sports hall at Djanogly City Academy in Nottingham. Despite the cool temperatures outside, the sports hall heating was certainly working well! 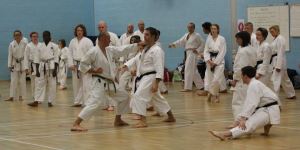 As is customary, the day began with presentations of Dan diplomas that had recently arrived from JKS HQ in Tokyo. Congratulations to all those who received diplomas.

The training itself began with an excellent warm and stretch led by Rachael Treadgold 3rd Dan from Red Tiger Karate Club in Manchester. Head of JKS England Alan Campbell Sensei then led the class through a superb session beginning with a series of core strength exercises that prepared the body for what was to come. 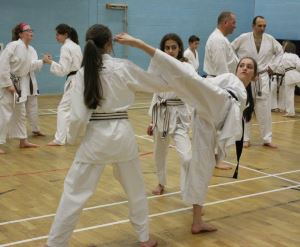 the punch being executed. Kizami tsuki and gyaku tsuki were analysed and practised hard with and without the aid of a partner.

Things then moved onto kicking with both Mawashi geri and Ura Mawashi geri. The class was introduced to a series of training methods with a focus on the trajectory of the kick to gain maximum power.

Finally the training session finished with three drills in groups of three that left participants exhausted. These were a fitting finale to a great black and brown belt course. 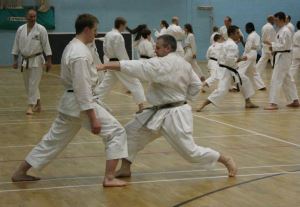 For JKS England instructors however, it was not over! They continued for an hour of instructor training and then onto the bi-annual instructor’s meeting.

The 2015 program of Black and Brown belt courses kicks off on Sunday 18th January in Nottingham with Instructor training to follow the session.