The 2014 Japan Karate Shoto Federation European Championships were held on the 12th to 14th September in Copenhagen, Denmark. 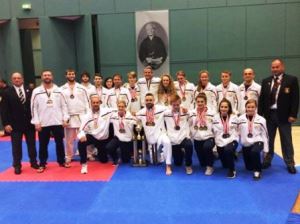 After two solid days of hard competition the squad have returned home with 8 Gold, 1 Silver and 9 Bronze medal positions. This result is a huge improvement on the last European Champiions in Turin two years ago where England came away with 3 Gold, 1 Silver and 3 Bronze. All JKS England members should be very proud of their Squad. The dedication and commitment of everyone involved is now really starting to pay dividends.


Particular mention must go to Ashley Scott who not only retained her European Kumite title but was also awarded the trophy for most outstanding fighter of the Championships!

It also has to be noted that of the eighteen English competitors in Denmark, every single one came away with at least one medal. A truly outstanding achievement!

Head Coach Matt Price commented on the teams performance at the championships"all the competitors were a credit to JKS England, I was extremely pleased with all of them"

The JKS England team now start the building process again with the next JKS World Championships to be held in South Africa next year.

Our full results were: