email
By NH
Published Wednesday, March 26, 2014
The JKS England Squad sent a team of ten to compete at the Swedish Open, the annual WKF International event held in Malmo.  The competition was on Saturday 22nd March and the Squad flew out from Manchester on the Friday morning, landing in Copenhagen and getting the train from the Airport to Malmo, 15 minutes away.

The Squad spent the day relaxing before meeting at the Competition Hall for weigh in and registration at 6pm.  Thankfully everyone made their weight categories first time so it was then time for a good meal and an early night.

The competition started promptly at 8.45am the following morning.  It started with Kata, with Ashley Scott, Craig Williams and Lacie Stembridge all participating.  Unfortunately Lacie and Craig fell at the first hurdle whilst Ashley went out in the second round.

The afternoon saw the Kumite events.  Oliver Deane was first up and fought very well, making his way to the final before losing out to a Danish competitor.  This was an excellent result given that Oliver had only turned 16 a few days before and this was his first event as a Junior.

Amber Bannister also fought very well and fought her way to Bronze medal in the Female Cadet Kumite -47Kg event.  This was Amber's 3rd Bronze medal at International events in the last year, following good performances at the JKS World Championships in Tokyo and the British Open in Glasgow last year. 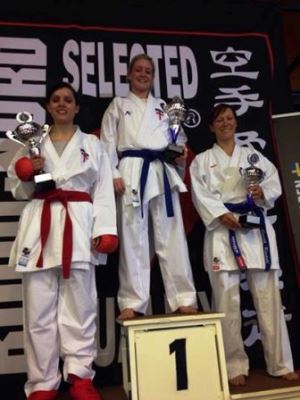 The highlight of the day was the Senior Female Kumite -61Kg where we had an all JKS Final with Ashley Scott narrowly beating Melissa Finlay to the title with a 1-0 victory.  Both Ladies have been regular medallists recently and were part of the team that narrowly lost to Japan last year in Tokyo.  The manner of Ashley's wins en route to the final clearly showed why she is JKS England's leading competitor and Squad Captain.

Squad Coaches Matt Price and Nick Heald were both very pleased with the efforts and results and competing at this calibre of event can only raise the general level of the Squad.  No rest for the wicked though and it's straight back into action next weekend at the EKF National Championships in Sheffield.