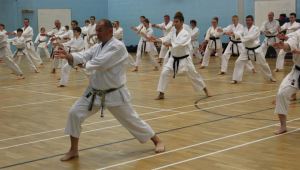 The session started with exercises to loosen the hip joints and explore different ways to deliver kicking techniques, including the less common Mikazuki Geri (Crescent kick) and Mae Kakato Geri (Front heel kick). These were then practiced with a partner who were encouraged by Alan Sensei to give feedback to ensure the technique was being delivered correctly and effectively.

Following on from this, the session then focused on body movement and spinning drills. Techniques such as Uraken were performed with an emphasis on correct timing of the strike and stance to give maximum energy at the point of impact. Alan Sensei then gave an in-depth analysis of how these techniques should be delivered with sharp, relaxed body movement to generate speed and power.

Just as most of the students were beginning to get dizzy this feeling was then further explored in the kata Heian Nidan. Adding spins to each technique helped everyone understand the need to control and support the movements with the whole body. The kata was then practiced in the new and old form. With students trying their best to execute what they had learned they attempted not to mix the two!

At the end of the session everyone was taken through a number of bunkai applications from the kata with the attack delivered from behind. The spinning techniques were then used to defend and counter the attacks, where keeping correct posture and centring the body was vital to success. 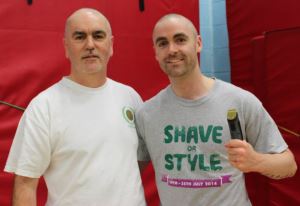 The course was thoroughly enjoyed by all with a great balance established between kihon, kata and kumite drills. At the end of the session, a corner of the dojo then turned into a barbershop for JKS Squad Member Craig Williams and his father Tony, raising money for the Macmillan Cancer Support Charity and the JKS England Squad. Luckily for Craig, the honour of shaving went to Paul Brant who was very gentle and certainly no Sweeney Todd!

Following the Black and Brown Belt session, the inaugural “Instructor’s Training” was then under way and started with kata standardization for Jo no Kata, Heian Shodan and Heian Nidan. Specific teaching points were stressed by Alan Sensei with senior grades given the opportunity to raise questions and discuss the answers. Fortunately, the session went by without any disagreements! All involved agreed that this was a great start to promote consistency across the JKS clubs.