Saturday’s sessions saw all grades training together and having three sessions led by Glenn Riley Sensei followed by Hans Rana Sensei and finishing with Steve Carless Sensei. Other instructors assisted during the sessions and helped students with some invaluable one-on-one advise and coaching.

The seminar kicked off at 10am sharp in the Saturday with Glenn Riley Sensei  starting with kihon techniques in shizentai covering empi, Shuto , and Haiti strikes, to front , behind , then front again , utilising shoulder snap and hip rotation . This was repeated Ido-Kihon repeating same movements, this time in Zenkutsu-Dachi moving onto various blocking technique adding in different preparation in order to execute correct technique using correct hip rotation. The session was a perfect start to the seminar. It was fast paced and definitely shook the cobwebs off everyone who trained.

There was no let-up in the second session led by Hans Rana Sensei where the focus was on kicking techniques. Every kick was performed in two stages, firstly as the preparation stage only completed with speed to prime the muscles to react quickly, and followed by delivering the kick itself. The lesson was excellently structured as it led onto the Asai-Ryu kata Rantai. Hans Sensei finished off with some speed related drills and some “gentle” stretching.

The final session on Saturday saw Steve Carless Sensei slow the pace somewhat and get the class thinking about footwork in karate and how it affects everything else the body does. The session began with a simple kihon exercise utilising various footwork and then each of the five ways of moving our feet were practised and more importantly explored within the framework of movement in karate. Two katas were practised to reinforce various movements that were practised; Heian Shodan and Junro Yondan.

Finally once training was completed a referees and judges session was conducted by Geoff Dixon Sensei 5th Dan. This was a perfect opportunity for anyone who had missed the referees, judges and table recorder course the previous weekend in Walsall. Once again Geoff Sensei delivered an excellent training session where he also shared information and developments that had come to light at the recent JKS European Championships held in Denmark.

Sunday’s sessions saw a slightly different format with classes being split between Dan and Kyu grades with Alistair Mitchell Sensei and Matt Price Sensei taking it in turns to teach two longer sessions to the eager students.

Matt Price Sensei focussed the kyu grades on the finer details of Heian Godan, highlighting many important points including the importance of gaining maximum power/ hip rotation in techniques. Everything was broken down into the finest detail. Bunkai was also covered which opened the eyes of many lower grade students. The class was completed by some of Matt Sensei’s trade-mark kumite drills, completed firstly alone and then with partners. The Dans grades were treated to a very similar session but with the addition of a similar detailed break down of Bassai-Dai.

Alistair Mitchell Sensei kicked off teaching the dan grades. Basic kihon exercises were practised but with a complete focus on relaxation within body preparation and utilising shoulder snap and fast hip action to create dynamic power. The session moved onto movement forwards and again focussing on relaxation and correct movement through the front knee to increase speed thus creating more dynamic karate. The session continued to build on these principles and led to some basic kumite moves with a partner. The session ended with some fun drills which continued to highlight the importance of relaxation through karate. The kyu grade session continued the same theme but with slightly less complex kihon and kumite execises. However, these were built into the kyu syllabus which was particularly helping to the students.

At the end of the seminar Head of JKS England, Alan Campbell Sensei thanked everyone for attending and supporting the seminar. The course was a great way to highlight some of the talent that JKS England is 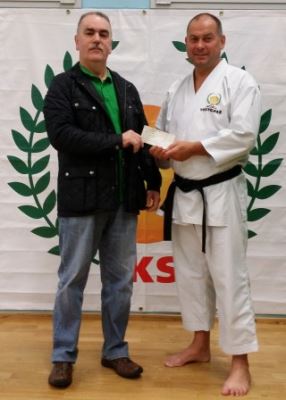 lucky to have within its ranks. Together with its talented international instructors and the immense talent from JKS Headquarters we are very lucky to be part of such an organisation.

Following the seminar on the Sunday was a dan grading.  Congratulations to the following successful candidates.