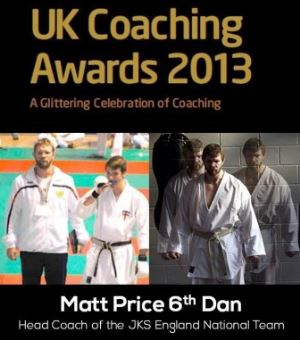 Matt Price Sensei is runner up in the UK Sports Development Coach category at the UK Coaching Awards 2013.

The Head Coach of the JKS England National Team was invited to attend the glittering evening event at the Montcalm, Marble Arch in London on 3 December.

Matt Sensei has had amazing success this year with both the Leeds Karate Academy and the JKS England National Team.

At the awards ceremony Matt was part of numerous mainstream sports elite coaches with Warren Gatland being named UK Coach of the Year after leading the British and Irish Lions to their first Test series win in 16 years.

It is a massive accolade for a karate coach to be recognised in this way. The UK Coaching Awards 2013, supported by Gillette, celebrates the role and performances of coaching and coaches at every level, from community coaches to elite coaches.

After the event, Matt commented "It was great to meet many of the top coaches from so many different sports. It was a great honour to be at the awards and especially good to see karate getting some recognition."

Congratulations to Matt Sensei from everyone in JKS for this fantastic recognition.