Alan Campbell Sensei officially welcomed everyone to the Camp before the training began on Friday evening. He also informed the assembled students that during each training session a number of film quotations would be used by the instructors and the person that guessed the film and quoted the most lines by the end of the Camp would win a free entry to a JKS Black & Brown course of their choice. Although this sounded a simple feat, it proved to be a hilarious addition to the event and one that Sensei Nagaki found the most difficult (probably because he had only seen the film in Japanese!).

Matt Price Sensei then opened Summer Camp with an explosive training session that analysed the punches kizami zuki and gyaka zuki; focussing on their basic form and drawing attention to the connection of the elbow to the hip joint during their execution. Once this principle had been grasped, the lesson addressed weight transition throughout the techniques, ensuring body weight moved forward into the punch giving the attack maximum power. Matt Sensei then proceeded to show how the defender could spoil the attack’s power by dipping their shoulder into the opponent thereby closing the distance between the fighters. Pair work between the students compounded this theory. The kata Heian Nidan was chosen to further demonstrate correct upper body form to hip movement and the focus was on keeping the elbows tucked in close to the torso (avoiding a ‘chicken wing’ form). These principles were then transferred to performing the kata Bassai Dai where timing and focus were also scrutinised. 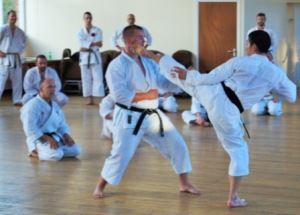 Nagaki Sensei also focussed on avoiding the ‘chicken wing formula’ in the lunge punch (kizami zuki), reverse punch (gyaku zuki) combination; he also addressed the flow of the technique. He instructed the students to maintain a defensive guard during its delivery and avoid any extra movements that may alert the opponent to the oncoming attack. These same principles were transferred to the execution of the round-house kick (mawashi geri) and drill work concentrated on keeping knees bent, avoiding any rise and fall when stepping forward. The kata Heian Nidan was repeated combining all the sessions’ principles within its implementation.

The weekend brought many more karate-ka to the Summer Camp and the subsequent training sessions were divided into two classes, kyu grades to Shodan and Nidan grades upwards. Each sensei rotated throughout the Saturday and Sunday’s three hour training sessions, each delivering an hour’s instruction at a time. 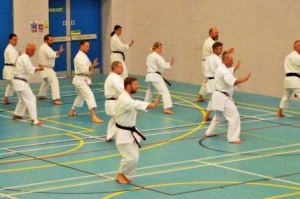 Day two saw Matt Sensei classes analysing the knife hand block (shuto uke), breaking down the technique so that the hips present square in the centre of the movement allowing a strong twist to emanate at the end of the block. He focussed on the muscle expansion and contraction within the technique and highlighted the need to avoid any additional movements; this culminated in the creation of a strong finishing stance. Matt Sensei then demonstrated the power that could be created by pushing off the back leg and using an effective hip twist. The kata Jiin was then utilised to reinforce these factors and principles. The kata’s combination of movements inclined themselves to several bunkai demonstrations that incorporated close quarter working, leg sweeps, take downs and floor defence.

Alan Sensei’s kihon training concentrated on hips and stances. A combination of five different stances were performed with movements slow and intense. At each stance change, Alan Sensei drew attention to the direction of the hips during the transition stages of the movement before the final position was reached. Students repeated this combination as drill work, before working in pairs, initially mirroring each other followed by one partner testing the other’s stance strength (kime). Hand movements were then added to each of the five different stances and focus reverted to technique and timing. The lesson concluded with the kata, Kashu carried out at a slow tempo allowing its form to be broken down and analysed. 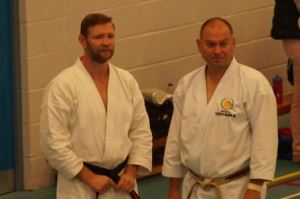 Saturday evening brought the opportunity to socialise with the other Camp members. After a three course meal, everyone moved on to the University Bar where there was a general knowledge quiz with a section of the questions related to karate, others had a Japanese influence. Nagaki Sensei was under strict instructions not to help anyone. The next game had an element of drinking and facial cream attached to it, and went by the name of ‘Ripple Tipple’ – Wendy Preston, REALLY!! It proved to be an excellent ice breaker from which the evening moved on with everyone chatting and sharing karate experiences.

Nagaki Sensei opened the final’s day training for the senior grades analysing sochin dachi stance. He focussed on the body’s weight distribution (60%/40%) through the stance and the direction of the knees and positioning of the feet when landing. Lunge punches (kizami zuki), reverse punches (gyaku zuki) and inside blocks (uchi uke) were added to facilitate hip movement, followed by round-house kicks (mawashi geri). The class worked in pairs to correct each other’s form before moving on to perform the kata Sochin.

The Kyu grade and Shodan karateka worked from free style (kamae) and concentrated on moving in a low, relaxed stance whilst maintaining an effective guard. Nagaki Sensei then analysed the kata Heian Yondan, confirming the kata’s correct form and targets and focussed on the fluidity of the movements learnt from the earlier teachings.

Matt Sensei began his session working straight from free style (kamae), using leg sweeps (ashi barai), reverse kicks (ushiro geri) and lunge punches (kizami zuki) in a drill combination. Once each technique’s form had been mastered, pair work was utilised to demonstrate the effectiveness of these movements in a fight scenario. In his inimitable style, Matt Sensei proceeded to add palm attacks (kuri zuki) and reverse punches (gyaku zuki) into the mix, increasing the speed and intensity throughout the process. Attention was then turned to distance and target and the students tried to touch their opponent to Sensei’s count. The session intensified when one partner was positioned against the wall being told they could only block their opponent’s random close quarter attacks using one hand deflection. The class culminated with more close quarter working using a shoulder attack to turn the opponent, allowing the attacker to apply a neck lock and choke hold. Matt Sensei demonstrated how this could be done effectively in spite of the vast different sized opponents in the training hall.

His Kyu grade and Shodan lesson explored the delivery of the reverse kick (ushrio geri), using the hips to control the kick. Students were instructed only to look at their opponent briefly after the kick had been thrown and extended as opposed to looking over the shoulder during the execution of the kick. A leg sweep (ashi-bari) was added to the technique which allowed the student to ‘ride’ its momentum and attack or counter their opponent with a reverse kick (ushiro geri).  Working in pairs, students were instructed to use the technique whilst moving within a tight circle. The lesson finished with a section of ground work from a side mount, working towards submitting the opponent. 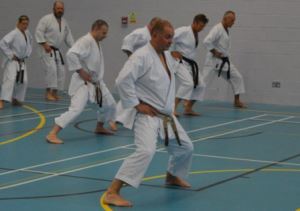 A competitive edge was brought to Alan Sensei’s last class with the senior grades when he divided the students into teams of seven. One karateka faced his team mates who formed a staggered line; the race required the karateka to work through the line-up throwing reverse punches until the six opponents had been scored upon. On finishing, the attacker became the final opponent and the front karateka turned to face the new line-up. Several run outs saw the two highest graded teams at odds with each other and as the tension rose, Alan Sensei re-grouped the students into teams of three. This exercise required one team member to face the other two and on completing a set of crunches, use close quarter working to turn their first opponent before scoring two head punches and a head kick on the final karateka. This combination was repeated until all three had completed the course. The class and the Camp culminated with the kata Hachimon, which Alan Sensei explained translated as ‘eight gates’. Movements were focussed and undertaken with intense concentration, the students being inspired by the teachings and experiences of their previous training sessions.

Alan Sensei’s last class with the Kyu grade and Shodan karateka analysed the correct form to be used when punching (oi zuki) and kicking (mae geri). Students were instructed to keep their shoulders down and relaxed, elbows tucked in and that tension (kime), should only be applied at the end of the technique to create strength and focus. When kicking, the tailbone should be tucked in and hips pointed forward. He then rationalised the importance of the correct positioning of the feet during the technique, allowing the student to drive the kick forward and through. Students were also instructed to ensure their supporting foot did not lift off the floor and that they controlled the foot during its return. An excellent training session for the students who were preparing for their Dan gradings.

For everyone who attended, it proved to be an unforgettable event; new knowledge gained, expertise enhanced and many new friendships were formed. All those who were part of Summer Camp 2014 can’t wait for 2015!

Following the camp was a dan grading.  Congratulations to the following successful candidates.